The Global Citizen from Nigeria by Klaus Roesler 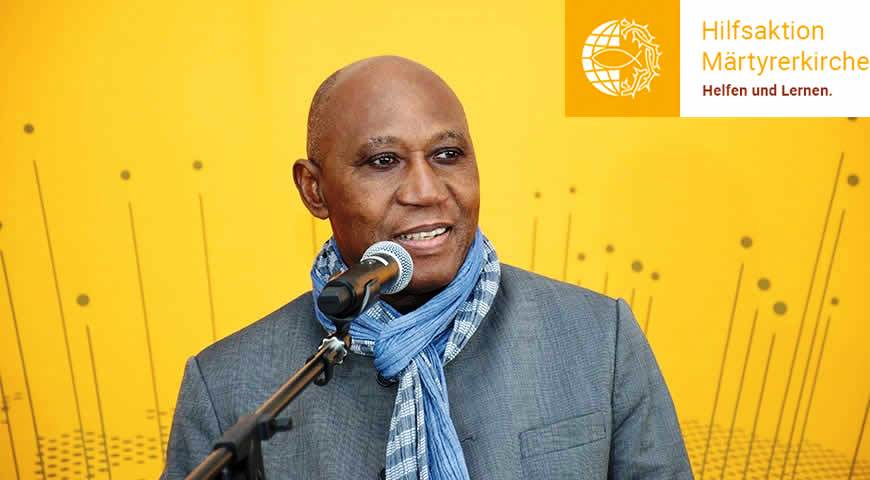 His first topic “The Persecution of Christians in Nigeria” seems to contradict his cheerful demeanour.

The Nigerian-born Catholic Theologian Professor Doctor Obiora Ike, 65 years old immediately won the hearts of the audience during a Lecture at the Martyrs’ Church relief operation in central Hesse.

Who is the Man?

I happen to be sitting next to him, a first cautious acquaintance. I briefly introduced myself in English. His reaction: ‘We can speak German.’ He speaks fluent German, English, French and the Igbo and Hausa languages ​​spoken in his home country. He is a mediator between Africa and Europe, a citizen of the world.

He goes to the Lectern – and praises Germany for its autobahns. Smooth roads do not exist in Nigeria. Car trips in his home country leave him shaken up. But the country has other advantages. For example, there are no retirement homes: Seniors are cared for in their families. The treasure of the country are its children. “People are more important than money and everything else.” One of his concerns, children need education: “Education gives a child a key to the future.” He himself founded two children’s homes that together house and care for 300 children.

He makes the listeners love his compatriots: the country’s 220 million inhabitants know how to party. Every occasion is used for this, and the dishes are well served. Three or four courses in a feast are the norm. Then a little dig at his hosts: Sausages for lunch, that would not work in Nigeria.

His further explanations leave you speechless; they are monstrosities. He tells of thousands of murdered Christians this year alone. They were killed by militant Islamist terrorists, Fulani rebels, Islamic State, the Boko Haram-Western education is a sin Movement. The victims offense are: “We build schools, hospitals and practice love. Christianity softens our hearts.” However, the Islamists want to push back the influence of Christians. So they kill.

Although Christians and Muslims are roughly equally represented in Nigeria, Muslims are in power – in politics, the police and the military. The result: Many of the 244,000 prison inmates are wrongly imprisoned. A Christian first name is enough to be suspect and arrested. However, you can freely buy those affected. This costs about 300 euros per person. Ike: “It is money well spent.”

Ike studied and was ordained a priest at Innsbruck, Austria. He received his doctorate in Bonn and qualified as a Professor. He was a Lecturer in Tilburg, Netherlands, and Theology Lecturer in Frankfurt am Main.

Since 2016, he has been Director of the Educational Foundation Globethics.net, Geneva. He also serves as the Pro-Chancellor of Plateau State University in Bokkos, near Jos. He founded 20 non-governmental organisations in Nigeria that deal with human rights, the relationship between Christians and Muslims, ecumenism and peace. He also heads the Nigerian representation of the International Society for Human Rights, ISHR.

From 1998 to 2009 he was Vicar General of the Catholic Diocese of Enugu in southern Nigeria. During this time an assassination attempt was made on him. Three men armed with guns wanted to shoot him. He told them that as a Christian he was not afraid of death because he would rise again immediately. But he asked the men to be allowed to pray in his Chapel first. There he also prayed for his alleged murderers. For them, however, it was clear: “You are a good person.” They fled.

For him, the Christian faith is a way of life. It is imperative that you pass on the fact that there is strength in this. Especially in Europe, the tired Christians have to wake up: “God is good – everyone has to know that.” He laughs and shows his white teeth.